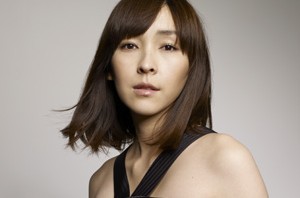 Kanjani8’s Yasuda Shota (28) and actress Aso Kumiko (34) are set to co-star in a new movie next year, titled “Bashauma-san to Big Mouth.” The movie is a romantic comedy directed by Yoshida Keisuke (“Junkissa Isobe,” “Sankaku”).

This will be Yasuda’s first starring role in a theatrical film (not counting Kanjani8’s “Eight Ranger”). It will also be Aso’s first acting work since she gave birth to a daughter in May.

The movie’s title describes the two characters, who meet in a screenwriting class. Aso plays the 34-year-old Mabuchi, who is working her hardest at becoming a screenwriter but who never gets a break. She is the “bashauma” of the story, a term that refers to the horse that pulls a carriage. Yasuda, on the other hand, is the “big-mouthed” 26-year-old Tendo, who talks a big game but has never done anything.

Theatrical release is scheduled for fall 2013.