Difference between revisions of "AKB48"

AKB48 (derived from Akihabara 48) is a female Japanese idol group produced by Akimoto Yasushi. They have their own theater in Akihabara (a district in Tokyo) where they perform regularly. The concept of the group is "idols you can meet". Currently, they hold the record of having the highest overall single sales (of a female group) on the Oricon charts.

In July 2005, renown producer Yasushi Akimoto held an audition for a new theater based idol girl group. Of the 7,924 girls that applied, 45 passed the first round of auditions, detailed screening of the application documents. Finally, only 24 girls were chosen to be in the group. In November, the selected girls went through an extensive one month training program.

On December 1st, the AKB48 Theater had its grand opening. On December 8, 2005, the group held its first public show in the theater with only 20 girls, later known as Team A. The team consisted of:

A second audition was soon announced, and was held in cooperation with Japanese telecom company NTT DoCoMo. It was the first audition ever where the applicants had to send in their audition video with their mobile phones.

In January 2006, three months before Team K was formed, Akimoto let Shinoda Mariko join the group as part of Team A. Failing the first generation audition, she didn't give up her dreams and worked as a waitress in a cafe in the same building and on the same floor as the the AKB48 theater. Through customer's feedback and Akimoto's challenge, she was able to join the group and is only person to be referred as generation 1.5.

19 of the 11,892 applicants who participated in the second audition were chosen to join AKB48, but in the end only 17 girls joined the group to become Team K in April 2006. They were:

AKB48 released its debut single Sakura no Hanabiratachi in February 2006, which made it to #10 on Oricon charts and sold 22,011 units in its first week - a surprisingly high rank for a group on an indies label.

In March of 2006, Usami Yuki of Team A became the first girl to graduate from the group.

On June 7 AKB48 released their second indies single, Skirt, Hirari, and performed on TV for the first time. Shortly after, on June 17th, Uemura Ayako of Team K graduates from the group.

In August 2006, AKB48 signed a major label contract with DefSTAR Records, a part of Sony Music Entertainment. Their first single under DefSTAR Records, Aitakatta, was released on October 25, 2006 and reached #12 on the Oricon Weekly Singles Chart.

In October 2006, a third audition was announced, resulting in the arrival of 13 new members forming Team B in December 2006. The selected girls were:

In December 2006, the first change was made to the three teams, transferring Kazumi Urano, Shiho Watanabe, and Natsumi Hirajima from Team A to Team B as supporting members. Orii Ayumi graduated from the group shortly after this.

On January 31st, 2007, AKB48's fourth single (second under DefSTAR Records) Seifuku ga Jama wo Suru was released; reaching #7 on Oricon charts. There has been speculation that the PV and lyrics to this song are an allusion to enjo kosai - voluntary underage prostitution - though this has not been confirmed. Their next single, Keibetsu Shiteita Aijou, featured a theme of bullying and suicide throughout the lyrics and PV. To promote the singles, AKB48 went on their second concert tour, AKB48 Haru no Chotto dake Zenkoku Tour ~Madamada daze AKB48!~ which began on March 10, 2007.

On New Years Day 2008, AKB48 released their first studio album, SET LIST ~Greatest Songs 2006-2007~. The compilation album included all of the group's singles up until their sixth, Yuuhi wo Miteiru ka?. Team K member Ohori Megumi (now in SDN48) became the first member to have a solo cover on one of AKB48's CD releases. She appeared exclusively on the cover of the Limited Edition of the album. The album managed to reach #3 on the Oricon Weekly Album charts.

In February 2008, AKB48 re-released their first indies single, changing the title to Sakura no Hanabiratachi 2008. This would turn out to be their last release under the DefSTAR Records label. A spring concert was initially announced. Fans who bought a copy of Sakura no Hanabiratachi 2008 at the theater would be given a random poster featuring one of the girls. If a fan collected all 44 types of the posters, they would be entered in a lottery to win tickets for their spring concert. The concert was later canceled because this violated a Japanese anti-monopoly law.

In October and November of 2007, Team A members Watanabe Shiho and Masuyama Kayano graduated.

On December 31, 2007, 43 members of AKB48 appeared on the 58th Annual Kohaku Uta Gassen, the prestigous end of the year music special. They performed with idols Leah Dizon and Shoko Nakagawa.

In August 2008, Team B member Kikuchi Ayaka was fired after pictures of her with a boy surfaced. Fans requested a second chance for her. In the end, she had to audition again and was readmitted as a Research Student.

On October 2008, the group signed with KING RECORDS under the You, Be Cool! sublabel, and released their 10th single titled Oogoe Diamond featuring Matsui Jurina of the just newly formed SKE48 on the CD cover. In that same month, at the final performance of A4 Revival, original members Ohe Tomomi, Komatani Hitomi, Tojima Hana, Nakanishi Rina and Narita Risa announced their graduation simultaneously. Their graduation took place at AKB48's NHK Shuffle Concert on November 23, 2008.

From August 22-23, 2009, AKB48 and SKE48 performed a concert at the famous Japanese stadium, the Nippon Budokan. At the end of the concert a new formation of AKB48 was announced, shuffling members from all teams. Each team was also assigned a captain; Takahashi Minami was to lead Team A, Akimoto Sayaka was to lead Team K, and Kashiwagi Yuki would become the leader of Team B. 4 of the group's oldest members, Ohori Megumi, Noro Kayo, Urano Kazumi, and Sato Yukari were transferred into the newly announced mature group named SDN48 (Saturday Night 48).

In October 21, 2009, AKB48 released the single RIVER which became the first AKB48 single to reach #1 on the Oricon Weekly Singles chart. It became the second best selling female single of 2009.

In December 31, 2009, AKB48 performed RIVER-Surprise special remix at the 60th NHK Kouhaku uta gassen. 72 members (all AKB48, the Kenkyusei, and 3 SKE48 members)) were in the performance.

On March 3, 2010, a full 5 months after they announced that all the teams were to be reshuffled, the first new formation of AKB48's Team K premiered with their new stage titled "RESET."

On December 8, 2010, AKB48 celebrated its 5th anniversary in the theater with a special performance by all members, as well as returning graduates. All 9th generation kenkyuusei were also promoted.

In March 2011, it was announced on their blog they have temporarily closed the AKB Theater due to the 2011 Sendai earthquake and tsunami. Many upcoming activities were also postponed, including their concerts at Yokohama Arena from March 25th to the 27th, and the release of their first studio album, Koko ni Ita Koto.

On June 6, 2011, AKB48 made public announcement during this evening’s Himawari H1 Revival Stage the formation of a brand new AKB48 team, bluntly titled Team 4. The Team will consists of the 10 previously promoted kenkyuusei.

On June 11th, 2011, It was announced at a handshake event that Eguchi Aimi, a girl who auditioned for NMB48, would be joining AKB48 as a trainee, she appeared immediately in Playboy Weekly and in advertisements. Producer Akimoto Yasushi stated that she will be “the heroine of the new age”. Eguchi was immediately met with skepticism from many fans and soon Team K member Kikuchi Ayaka leaked on her blog that Eguchi was made of parts of other members through photoshop. On June 20th, Weekly Playboy published an article about Eguchi, stating that she was made up of parts of Takahashi Minami, Maeda Atsuko, Watanabe Mayu, Shinoda Mariko, Itano Tomomi, Oshima Yuko and 12th generation Kenkyuusei Sasaki Yukari.

On July 3rd, AKB48 announced and confirmed that they will be having their ‘24th Single Senbatsu Janken (Rock, Paper, Scissors) Tournament‘ in September. This will be the second year in a row that they will be choosing their ’senbatsu’ members for their new single, which is due to be released in December. The event will take place on September 20th at the Nippon Bukoukan once again. Moreover, This event will be broadcasting in Taiwan, Hong Kong, South Korea, Singapore and Thailand.

On January 27, 2012, it was revealed that Hirajima Natsumi and Yonezawa Rumi resigned from AKB48 due to scandals involving them.

On March 25, 2012, it was announced Maeda Atsuko would be graduating from AKB48. Her graduation ceremony was held on August 27.

On December 17, 2012, it was announced that Kasai Tomomi would be graduating from AKB48.

On January 31, 2013, It was announced that 1st Generation member, Minegishi Minami would be demoted to Kenkyuusei level, due to a scandal involving her. On August 24, Minegishi was promoted when the new Team 4 was formed and was appointed as its captain. On July 21, Team A captain and leading member Shinoda Mariko graduated from AKB48, making Yokoyama Yui the new captain of Team A. On August 22, former Team K captain Akimoto Sayaka also graduated. Four days later, leading member Itano Tomomi graduated from the group.

On November 4th, 2006, it was announced that the members of Akihabara48 would be rearranged into two groups: Baragumi ('rose group') and Yurigumi ('lily group'). No more official announcements have been made on this matter since then, and it is widely believed that this idea has been scrapped.

However when the single Kaze wa Fuiteiru was released, the idea of Baragumi and Yurigumi was resurrected as part of the Under Girls B-side groups. It was used once again in the single Kibouteki Refrain, but with an additional third unit, Cattleyagumi ('cattleya group').

The two groups are as follows (☆ denotes a girl who has changed teams or graduated since the announcement was made): 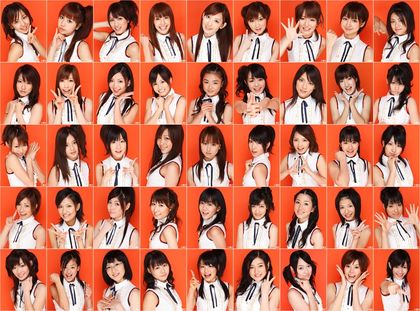 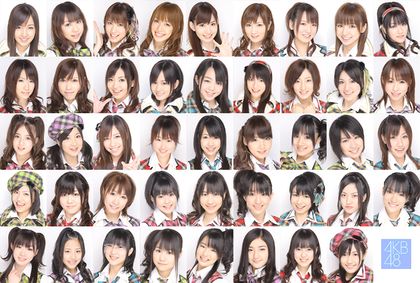 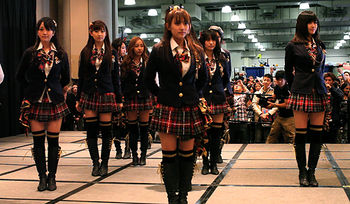 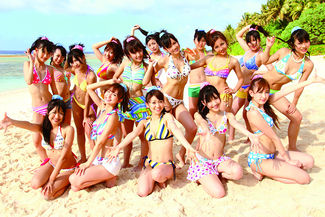 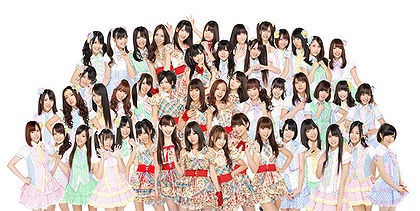 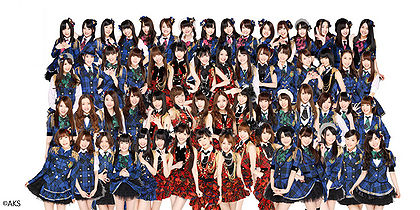 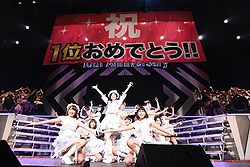 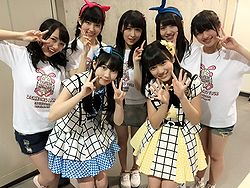 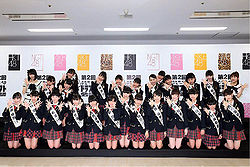 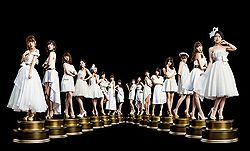 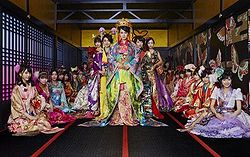 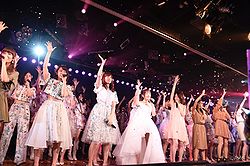 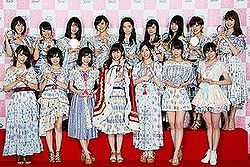 Senbatsu from the 8th Senbatsu Election 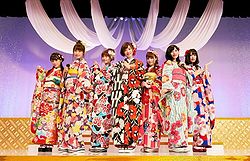 Jankenmin from the 2016 Janken Taikai 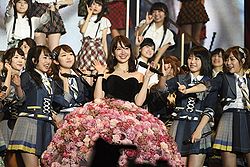