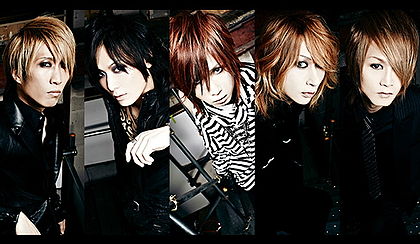 Angelo is a five member rock band originally from the Kantou area of Japan. The group was officially formed by three former members of the visual-kei band PIERROT in August of 2006 and was announced by KIRITO at the finale of his solo tour EXISTENCE PROOF. They are currently managed by MAIN GATE WORKS and are signed with the avex trax sub-label blowgrow. In late August 2011 it was announced that Karyu (ex-D'espairs Ray) and Giru (ex-Vidoll) joined the band as their official guitarists. BABEL, the group's fourth studio album, is the first release with the new members. 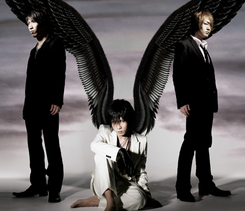 Angelo was formed on August 14th, 2006 and the formation was announced by KIRITO at his solo tour EXISTENCE PROOF final at Shibuya-AX. The member line-up was also announced, and was made up of former PIERROT members. It was KIRITO on vocals, KOHTA on bass, and TAKEO on drums. Angelo doesn't have an official guitarist, but TORU××× (UNDOWN) filled the role. They had also signed with blowgrow, an avex trax sub-label. blowgrow was also the label that KIRITO released his solo works under.

The group's first live was on October 4th at Yoyogi Kouen Yagai Stage and was called "The creature was reborn out of hades". It was free of charge and drew an audience of 5,000 people. The band's debut single "REBORN" was released on November 8th. It would reach #11 on the Oricon charts, where it charted for three weeks.

Soon after the release of their debut single, Angelo headed out on their first tour. The eight date tour titled BROKEN WORLD, AFTER THE HEAVEN started on November 11th at Kawasaki CLUB CITTA' and ended on November 27th at Zepp Tokyo. The tour was their last activities of 2006. Their start in 2007 began with the release of their second single "WINTER MOON" on February 28th. This reached #13 on the Oricon charts, where it charted for three weeks.

From April 1st to June 10th, the band held their second tour called EASTER FOR TREASON. It is currently their tour with the most dates (24), different venues (22), and also the longest. This began on April 1st at Hibiya Yagai Ongakudou and concluded on June 10th at Zepp Tokyo. The tour's finale was Angelo's first concert to be filmed for a later release. The DVD EASTER FOR TREASON was released on November 21st. It reached #63 on the Oricon charts, where it charted for two weeks. This was also their last release through blowgrow.

During the tour, on April 18th, the trio's debut album REBIRTH OF NEWBORN BABY was released. This reached #19 on the Oricon charts, where it charted for three weeks. Soon after the tour Angelo transferred to another avex trax sub-label called Eastlink Records, which was made for both KIRITO's and Angelo's future releases. Their next activity was in August for two fan club only lives titled "INTER PLAY MEMBERS LIMITED SHOW (DOGMATIC PARTY case of Angelo)". They were held on two consecutive days starting on August 30th, both at Shibuya C.C.Lemon Hall. 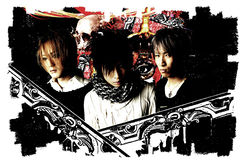 Angelo's third tour titled THE FRENZIED EMPIRE bridged 2007 and 2008, and only three of the 17 dates were played in 2007. It started on December 21st, 2007 at Ichikawa Bunka Kaikan and ended on March 16th, 2008 at Nippon Budoukan. The tour finale was their second concert to be filmed for a later release. The band's first release on the new label was thier mini-album THE FREAK SHOW, which was first released on December 21st. The mini-album was only sold during the aforementioned tour, with a premium edition coming with a DVD that was only sold at the final.

On June 11th the group released their third single "CHAOTIC BELL". This is their first release to chart within the top 10 on the Oricon weekly charts. It reached #9 on the Oricon charts, where it charted for three weeks. Days later Angelo headed out of their club tour called VEILED SIGN. The 10 date tour began on June 15th at Shinkiba STUDIO COAST and concluded on July 21st at Fukuoka DRUM LOGOS. 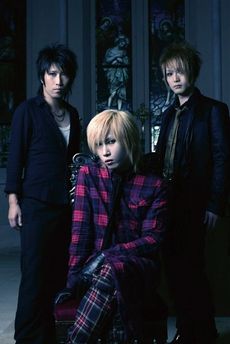 Angelo's next bout of activity was the years' fan club only lives in August, titled "INTER PLAY MEMBERS LIMITED SHOW 08 (DOGMATIC PARTY case of Angelo)". They were again held on two consecutive days, starting on August 15th, and at Shibuya C.C.Lemon Hall. During the concerts the memorial box version of THE FRENZIED EMPIRE FINAL at NIPPON BUDOKAN was released.

On October 22nd the band's fourth single "SISTER" was released. This reached #13 on the Oricon charts, where it charted for three weeks. It was also their last release through Eastlink Records. The next month Angelo's fourth tour, called NATURAL BORN ULTIMATE CHILD, started. It had also bridged 2008 and 2009, but this time only three of the 21 dates were played in 2009. This tour began on November 13th, 2008 at Shinkiba STUDIO COAST and concluded on January 6th, 2009 at Shibuya-AX.

Sometime during the tour Angelo switched labels to KING RECORDS. Their first release on the new label was their fifth single "Usubeni no Kakera", which was released on March 25th. It reached #12 on the Oricon charts, where it charted for five weeks. In April there were two things simultaneously released on the 22nd, their second album METALLIC BUTTERFLY and a special version of THE FRENZIED EMPIRE FINAL at NIPPON BUDOKAN. The album would reach #20 on the Oricon charts and the DVD reached #123 on the charts. The album charted for two weeks while the DVD charted for only one. These were their last releases through KING RECORDS.

To support and promote the new album the band held a live titled "MORPHING OF [METALLIC BUTTERFLY]" at NHK Hall on May 8th. Their fifth tour, called GROWS UP METALLIC BUTTERFLY, followed the next month. The 13 date tour started on June 13th at Misato Bunka Kaikan and ended on July 26th at Shibuya C.C.Lemon Hall. 2009's fan club only lives, collectively titled "INTER PLAY MEMBERS LIMITED SHOW 09 (DOGMATIC PARTY case of Angelo)", was on and at the same days and venues as last year (August 15th/16th, Shibuya C.C.Lemon Hall).

Rounding off the year were to more lives, both at Tokyo Kokuritsy Yoyogi Kyougijou Daini Taiikukan and on two consecutive days. The first of which was the "Angelo 09 CLIMAX SHOW CASE CRACKING ROSARY" concert on December 30th, and the second of the two was the "Angelo 09-10 COUNT DOWN SHOW CASE REWRITING" live on the 31st. The "REWRITING" concert was their third one to be filmed for a later release.