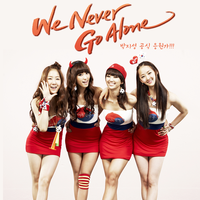 "Bakjiseong Gongsik Eungwonga!!! (We Never Go Alone)" is SISTAR's first digital single. It was used as a cheer song for the South Korean national football team at the 2010 FIFA World Cup, and was based on the theme of trust and leadership of Manchester United's attacking midfielder and South Korean national team captain Park Ji Sung. Starship Entertainment stated "SISTAR is delighted to be singing this official fight song and the girls are big fans of Park Ji Sung!" The MV was released on June 17, 2010.