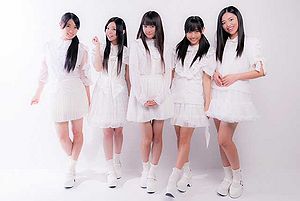 Dorothy Little Happy is a Japanese pop idol group under the label avex trax. The group was formed in 2010 with members of the unit B♭ from Sendai. Producer Sakamoto Satoru got the inspired behind the band's name from the novel Wizard of Oz. The group consists of five vocalists with KANA as the lead vocals and backup dancers.

The group released their first single, "Jump!", in 2010 under an indies label. However, two months later, MICHIYO decided to graduate from the group in order to focus more on her studies. That didn't stop the group as they signed with the label avex trax in early 2011 and released their first major release, the mini-album Demo Sayonara.