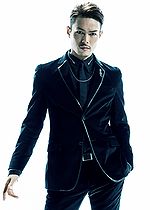 Imaichi Ryuuji (今市隆二) is a Japanese singer. He is a member of the group Sandaime J Soul Brothers. He joined the group after winning, along Tosaka Hiroomi, the "EXILE Presents VOCAL BATTLE AUDITION 2 ~Yume wo Motta Wakamonotachi e~". Four years earlier, in 2006, he also participated on the "EXILE VOCAL BATTLE AUDITION 2006 ~ASIAN DREAM~", however he did not pass the second round.