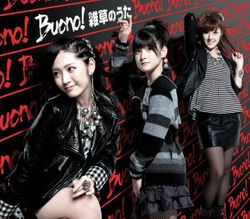 "JUICY HE@RT" is a song recorded by Buono!. It was used as the sixth ending theme song for the BS Nihon TV program Bowling Kakumei P★League. It appears on the single "Zassou no Uta" as track #3 and on the mini-album partenza as track #7.

There are currently two versions of "JUICY HE@RT" to be found in Buono! and Hello! Project's discography. These versions are: