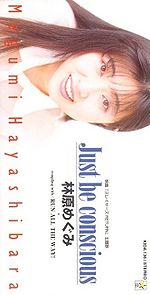 "Just be conscious" is the 22nd single (17th major label single) released by Hayashibara Megumi. The title track was used as the theme song to the Slayers RETURN anime film. The B-side, "RUN ALL THE WAY!" was used as an image song for the movie and it was used in the Slayers Special anime OVA. This is Hayashibara's sixth single to have a tie-in with the popular Slayers series, and fourth one in a row. This is also Hayashibara's first single to feature lyrics written by Hayashibara instead of a lyricist (she had previously written some album tracks and B-sides).

The single reached #11 on the weekly Oricon chart, and stayed on the chart for a total of ten weeks. At this point in time the single was Hayashibara's highest charting solo release ("Give a reason" reached #9, but the single was split with Okui Masami). It sold 175,110 copies in total. This is the 14th best selling anison single all time.