"LUV" is a song recorded by APink. It was released in their fifth mini-album Pink Luv as track #1 and was used as the lead track of the mini-album.

Six months later, the song was re-recorded in Japanese and released as their third Japanese single titled "LUV ~Japanese Ver.~." It was released in nine versions: eight limited editions (two CD+DVD versions and six limited CD only editions, including a solo jacket cover and a trading card of the correspondent member) and a regular edition. Limited edition type A includes special goods with the single while both limited editions came with a Music Connecting card. The b-side, "Good Morning Baby ~Japanese Version~", is a Japanese version of the original Korean song. 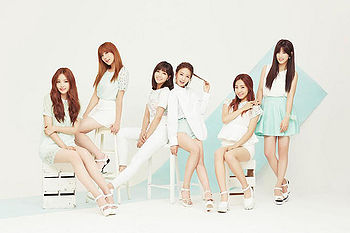