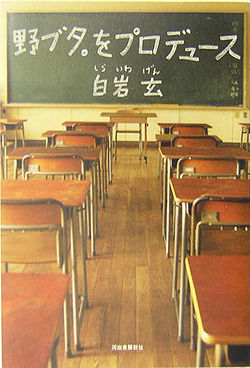 Cover of the novel

野ブタ。をプロデュース (Romaji: Nobuta wo Produce; English: Producing Nobuta) is a Japanese dorama based on a book of the same name by Shiraiwa Gen (文藝賞). It aired in the fall/winter season of 2005.

It begins with the introduction of the main character, Kiritani Shuuji, (Kamenashi Kazuya), a popular high schooler who uses lies and manipulation to create a comfortable life for himself in the close knit 2-B high school class. He is friendly with almost all of the other children in his school and has convinced the school's beauty Uehara Mariko (Toda Erika) that she is his girlfriend, despite the fact that he has no desire to actually date her. He has a natural enemy, however, in the mildly existentialist and mostly weird Kusano Akira (Yamashita Tomohisa).

One day a new girl comes to their school, Kotani Nobuko (Horikita Maki). She is a loner with long stringy hair who stumbles and stutters through life, drawing the anger and mocking of several of the class' more violent girls. After Shuuji and Akira witness a particularly nasty event they decide to "produce" Nobuko, who they nickname Nobuta and make her the most popular girl in school. Slowly Shuuji, Akira, and Nobuta become close friends and face the strange happenings of the town and the doings of someone hoping to expose their plot for what it really is.

While the story is superficially about the two boys making Nobuta popular, the true plot lies in the changes that Shuuji goes through as the lies and manipulations he has lived with and made use of break down leaving him with only the option of changing himself. Throughout the dorama, Shuuji recognizes the changes he has already undergone through befriending Nobuko and Akira and realizes the changes he must make in order to become a good person.

The dorama and the novel hold several key differences. The first being the absence of an Akira character and the second being the fact that Nobuta is a chubby, greasy boy. Shuuji begins to produce Nobuta out of boredom, which leads to essentially the same effect as the drama only the consequences are much more negative. In fact the tone of the novel itself is more negative and serious than the drama. There is also romantic compitition between Nobuta and Shuuji for Mariko's affections. While the drama and the novel are different in many aspects, however, they both explore essentially the same themes.

The dorama version of Nobuta wo Produce was broadcast from October 15th, 2005 to December 17th, 2005. While it did not have astounding viewership, it was immensely popular and became a landmark in the careers of all of the main actors. The theme song is Seishun Amigo by Shuuji to Akira which was the number 1 single of the year on the Oricon charts. The series consists of 10 episodes.