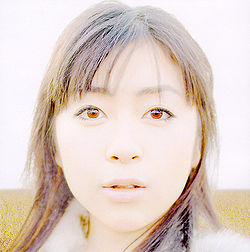 Passion is Utada Hikaru's 15th single. Passion was used as the theme song for the game Kingdom Hearts II, and is the follow-up to Simple And Clean/Hikari, which Utada also sang for Kingdom Hearts in 2002. The exact version of Passion that is used for the opening theme song is not on the single, though Passion ~after the battle~ is used as the ending theme song. There is an English version of this song, much like Simple And Clean was to Hikari, and is titled Sanctuary. Passion also appears on the Kingdom Hearts II Original Soundtrack three times; with two new versions (Passion ~opening version~ and Passion (Orchestral Ver.)) as well as Passion ~after the battle~. Despite this single reaching #11 on the World Charts for single sales, this single did not even chart on the airplay chart. This single charted for 16 weeks. As this single sold 112,345 copies in 2006, it was the #91 single of the year.

Passion was directed by Kiriya Kazuaki, and filmed at Gung-Ho Films studios in Beijing, China. Throughout this music video, there are many scenes which include CGI-imagery (which was produced by N-Design), and the opening even included an anime-style animation sequence. The anime sequence was produced by Morimoto Koji and his company STUDIO 4°C. These are the same people who created the Fluximation-style animations for cellphone services using songs from Utada's EXODUS album. In fact, the same character shown at the start of the music video for Passion is shown in the Fluximation for Utada's song Opening. There is also an English song, entitled Sanctuary which has the same music. Sanctuary was written and recorded before Passion.

There are six known versions of Passion to be included in Utada's discography. These include:

Passion ~single version~
Found on Passion single as track one, and on the ULTRA BLUE album as track #13. The "~single version~" subtitle is only used on this release; it is not used in the PV or on ULTRA BLUE.
Passion ~after the battle~
Found on Passion single as track two. This is the ending theme for Kingdom Hearts II. This version differs from the single version by being longer, slower and having more of a piano base to it. 'After the Battle' is also found on the Kingdom Hearts II Original Soundtrack as disc two, track 33. The last stanza of Passion ("Zutto mae ni suki..." onwards) is not included in the 'After the Battle' version.
Passion ~after the battle~ (HOLIDAY LIVE SPECIAL)
Found on Utada Hikaru Single Clip Collection Vol.4 music video DVD as track #11. This was originally available for download from Utada's Toshiba-EMI website from December 22, 2005 until Janurary 10, 2006. This version was recorded live in one of Toshiba-EMI's offices, and Utada firstly introduced herself and gave everyone a Christmas message. The performance was a live acoustic version of Passion ~after the battle~, much like the Be My Last (Internet Live Version). However, differing from the Be My last live, this version is backed with someone else playing the piano and another person on the guitar; instead of just Utada herself playing the guitar. Also included before the Passion performance was a cover of Green Day's song Boulevard of Broken Dreams.
Passion - KINGDOM Orchestra Instrumental Version
Found on the Kingdom Hearts II Original Soundtrack as disc one, track two. This version is vocalless, as per the former Hikari Kingdom Hearts Orchestral version. It was performed by the Tokyo Philharmonic Orchestra, and composed/arranged by Wada Kaoru. The orchestral piece was recorded at the Tokyo Opera City Concert Hall. The recording/mixing engineer on this piece was Yamada Masahiro.
Passion ~opening version~
Found on the Kingdom Hearts II Original Soundtrack as disc one, track three. This is the opening theme for Kingdom Hearts II. There is a part of this song that sounds more rocked up, which has different lyrics from the standard, namedly 'Hitoshirezu, My heart's a battleground' (Hitoshirezu (人知れず); meaning 'unseen') as well as another reversed English sentence which may be heard as "I need true emotions" backwards.
Passion (Utada United Live)
Found on Utada United 2006 DVD as track #2.

In Passion, there are several layers of English lyrics. At one point, "My fears, my lies" is audible. There are also many parts of the song with reversed lyrics. A magazine interview confirmed that the lyrics were, "I need more affection than you know"; though there was much dispute over this. A blog entry posted by Utada herself on June 10th, 2006 infers to some lyrics she wrote to Passion but were never used such as "Shizuka na tabibito no utau uta ni wa, Mada kotoba ga nai" which tranlates to "The song sung by a quiet traveler has no words yet" and "Hisoyaka na jounetsu ga itsumo, Zidai wo ugokasu" which translates to "A secret passion is the one that makes time move".

Note: Sales were combined for weeks three and four due to Oricon holidays.