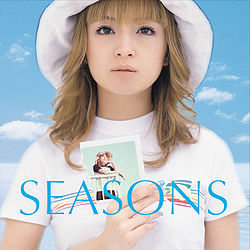 SEASONS is Hamasaki Ayumi's 16th single. SEASONS was used as the theme song for the dorama Tenki Yohou no Koibito, while TO BE (Acoustic Version) was an insert song. SEASONS "D-Z BLUE SUNBEAM MIX" was used as the CM song for KOSÉ VISÉE's Henkou Metallic series of makeup. This single reached #1 on the Oricon charts and sold 1,362,740 copies in 2000, becoming the #5 single of the year. It charted for 21 weeks and sold a total of 1,367,400 copies.

SEASONS was released as part of Hamasaki's 2000 single trilogy, and was preceded by vogue and Far away. Hamasaki has said that the singles are looking at her life from three different angles. The cover art for vogue is a close-up of Hamasaki's face. The cover of Far away has zoomed out to reveal the photo of Hamasaki standing on a deck, next to someone else who has been torn off the photo. The cover of SEASONS shows Hamasaki, by the ocean, holding that half of the torn photo.

The music video for SEASONS was directed by Takeishi Wataru. It's the final part of the "vogue/Far away/SEASONS" trilogy PV. The SEASONS part shows drawings in the sketchbook of the world around them before it was destroyed, and Hamasaki is singing in black funeral garb.