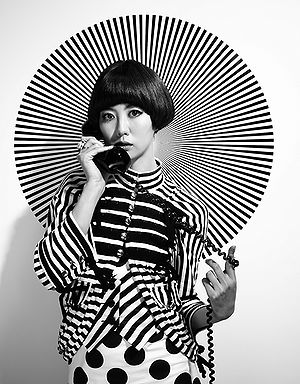 Tomosaka Rie (ともさかりえ) is a Japanese pop singer and actress. She made her debut in the mid-1990s and became well known for her collaborations with Shiina Ringo. During the height of her popularity she made some releases under the name Sakatomo Eri. In 2000 Tomosaka left the music business, with her last single being the Shiina-produced "Shoujo Robot". In 2009, Tomosaka returned to the music world with her new album, Toridori., for which she worked with such artists as Shiina Ringo, Kimura Kaela, and clammbon.

By the end of 2010, Tomosaka Rie and Suneohair are planning to get married. It would be the second marriage for Tomosaka, who divorced from theatrical producer Kawahara Masahiko. Suneohair has previously been married twice to the same woman, with whom he has two children. Their relationship apparently started with the movie Aburakusasu no Matsuri which is scheduled for release in late autumn. They sing a duet for the ending theme song.