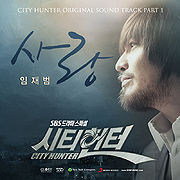 "City Hunter OST Part.1" is the eighth digital single released by Yim Jae Beum. The song was used as the theme song for the drama City Hunter, and was later released on its OST.