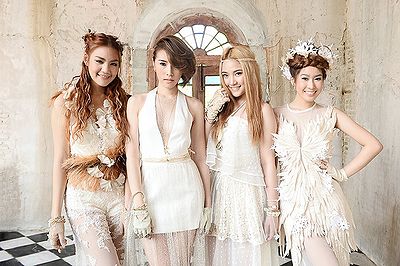 Candy Mafia (แคนดี้มาเฟีย) was a 4 member Thai-pop girl group that debuted in 2010 under Mono Music and disbanded in 2015.

The group began as a group of four who did cover dabces of Korean dance groups (especially 2NE1 and 4Minute). As a result of their hard work and dedication, they won various awards from dance contests in Thailand. Finally they entered Mono Music, training for two years before their debut. Debuted on January 29, 2009 with the song "Mafia" that was not well received by fans of K-Pop (due to it's perceived similarities to the videos for "Fire" by 2NE1 and "Muzik" by 4Minute), but it was a success in their native Thailand.

In July 27, 2010, the group released their second single "Alzheimer" and announced that a new member named "Milk" had been added in order to help differentiate the group and try to distance themselves from 2NE1. They later released "Blink Blink" in November 2010, "Low Sugar" in July 2011, and "Honey Honey" in November 2011. Member Nune then announced she would be going on hiatus to focus on her schoolwork and family (her mother had previously passed away during the promotions for "Blink Blink").

In 2015 it was revealed that the group had disbanded after the expiration of their contracts, although the girls remain friends. BamBam has since redebuted in the T-Pop group MilkShake, whose debut MV garnered over two million views in less than three months.