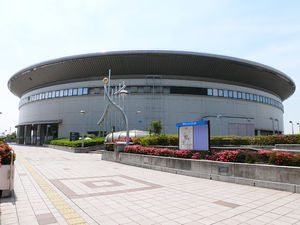 The front of the arena.

Nagoya-shi Sougou Taiikukan is an indoor arena, located in Nagoya, Japan. Until April 1st, 2007, it was called Nagoya Rainbow Hall (名古屋レインボーホール), after that it became the Nippon Gaishi Hall (日本ガイシスポーツプラザ) due to sponsorship of NGK Insulators, Ltd.

The arena has a capacity of 10,000 people and it hosted some of the games of 2006 Volleyball World Championship. It also hosts many concerts, fair trades, conventions. It stills hosts swimming, diving events and it contains an ice skating rink.