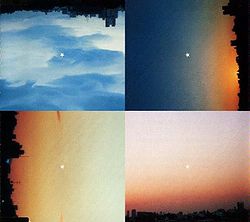 "Star Gazer" is the 28th single released by Spitz. The title track was used as theme song for the TV show Ainori The single reached #1 on Oricon charts, and charted for 13 weeks selling 121,741 copies on it's first week. It was their first #1 single since the release of "Scarlet" seven year earlier.