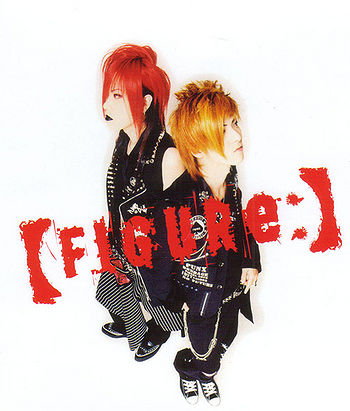 [FIGURe;] (【FIGURe;】) was a Japanese visual-kei band. The group was formed in the December of 2004 by vocalist Sakito and bassist Kikasa, both of whom had previously been members of the indies band Dué le quartz.

Following Dué le quartz's disbandment, Sakito had disappeared completely from the music scene whilst Kikasa had gone on to work with Shelly Trip Realize (whom he parted ways with in the April of 2004) and had also contributed in a minor side-project, Unzu with Sakurai Yuki of rice.

Despite a few successive releases, it was in the August of 2005 that Sakito was absent from a performance by the band, leaving Kikasa to fill in both the role of bassist and vocalist during his absence. This situation however, was announced as temporary despite being linked to problems within Sakito's family. Unfortunately, it was later announced that Sakito would be leaving the band due to undisclosed circumstances and it was at the beginning of September that [FIGURe;] officially disbanded.