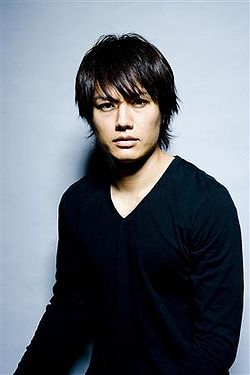 Oshio Manabu (押尾学) is a Japanese pop singer and actor. For his singing career, he credits himself as LIV.

Oshio Manabu debuted as an actor in the drama Ai, Tokidoki Uso in 1998. On October 4th, 2005, he announced that he will quit acting and Satomi Hakkenden was his last drama. He's also the lead singer of pop band LIV which Oshio is the only member. The band made its major debut in 2002 under Universal Music Japan with the single "Without You". However, Oshio left Universal Music in 2005. In May 2008, it was announced that Oshio transferred to avex trax to have more support for his career. In 2009, it was announced that he will return acting in 2010 with the movie Dakara Oretachi wa, Asa wo Matteita.

Raised in United States from the age of 4 to 12 before moving back to Japan, Oshio is fluent in English. He usually writes his lyrics in both English and Japanese, sometime in Chinese. He married actress Yada Akiko in 2006 and they had a son in 2008. On Monday August 3rd, 2009, he was arrested for drug use after a woman was found dead in an apartment, Avex Management Inc also terminated a contract with him on the same day[1]. His wife, actress Yada Akiko also filled a divorce after his arrest.