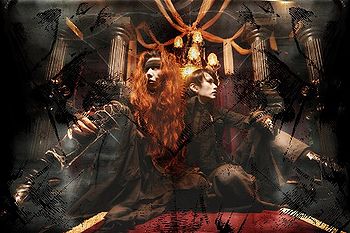 Eve of Destiny are a gothic industrial act, founded by Haruhiko Ash, formerly of The Zolge, and featuring Közi, ex-guitarist of MALICE MIZER, who officially joined in 2002. Unusually for a Japanese band, a large proportion of their live performances are overseas. The first Eve of Destiny gig took place in Leipzig, Germany, in 1998. Since then they have performed many times in Scandinavia, Germany, Poland, Austria etc... and have also developed a following in Australia. Due to problems with their former record label, Celtic Circle Productions, it is quite difficult to obtain a copy of their album Nervous and Innocence. Eve of Destiny's departure from CCP caused the cancellation of some gigs. The band is currently on hiatus and their official website was closed.