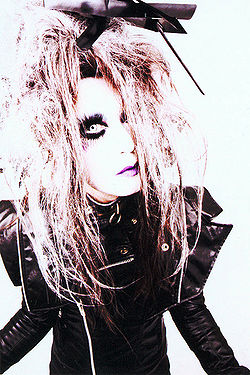 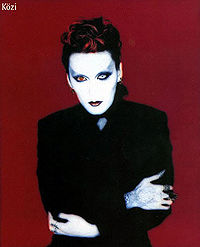 Közi was the guitarist of MALICE MIZER, an influential Japanese gothic band noted for their extravagant costume and varied musical styles. Közi was a founding member along with Mana, and shared songwriting duties with him. His compositions for the band, such as "Illuminati", "Color Me Blood Red" and "Baptism of Blood", are notable for their more electronic and gothic qualities, as well as lyrical themes of sado-masochism and sexual fetishes. He most commonly played the part of a clown/pierrot and the color most frequently associated with him in the band was red.

After Malice Mizer disbanded in 2001, Közi joined Eve of Destiny with Haruhiko Ash. Eve of Destiny is an electronic industrial/goth band, with him as both guitarist and programmer. Eve of Destiny are notable for their touring activities - unlike many Japanese bands, they perform a large number of gigs in Europe.

In 2002, Közi released a solo work, collaboration with a Japanese writer, Minako, who wrote a story book about a sister and brother whose bodies were inseperable, with Közi writing the music, the set was entitled Izayoi no Tsuki. From there, Közi went on to persue a solo career alongside his activity in Eve of Destiny. His first release was the double single "KHAOS / KINEMA," which included the song "Promenade" co-written by Haruhiko Ash. This track was re-released on his full-length album Katharsis. He followed this with single "MEMENTO" in 2004, co-written by ex-MALICE MIZER bassist Yu~ki, and dedicated to the band's late drummer Kami (who died in 1998).