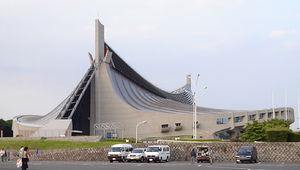 The front of the First Gymnasium.

Kokuritsu Yoyogi Kyougi-jo (国立代々木競技場) or Yoyogi National Gymnasium, is an indoor arena located in Yoyogi Park, Tokyo. It was designed by Tange Kenzo and built to swimming and Diving events during the 1964 Summer Olympics.

The arena is divided into two gymnasiums, the first housed swimming events, while the second gymnasium housed the diving events. The roof of both gymnasiums uses a structure similar to the ones that suspends bridges.

The first gymnasium has a capacity of 13,291 people, and despite it being build to support swimming during the Summer Olympics, it can also house ice rinks during winter and during the spring and autumn, wooden panels are put on the pool to other events.

The first concert performed there was by CHAGE and ASKA and it quickly became famous to concerts due to a more flexible seatings configuration and good quality of sound, which Tokyo Dome didn't offered at the time. Hamasaki Ayumi always holds her tour finales at the first gymnasium and it is consequently released on DVD, she also held her annual countdown live there.

The second gymnasium is not commonly used for concerts, it generally houses wrestling .