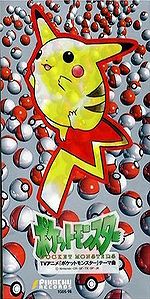 "Mezame Pokemon Master" is the fifth single released by Matsumoto Rica. All the songs on the single had tie-in's with the anime Pokemon. The title track was used as the opening theme song, "Hyaku Gojuu-Ichi" was used as the ending theme song, and the other two song were used as insert songs in the series. The single reached #7 on the weekly Oricon chart, and stayed on the chart for a total of 56 weeks. The single sold a total of 1,127,760 copies and is the best selling single released by a seiyuu. It is also the only single released by a seiyuu to sell over a million copies.