Difference between revisions of "THE RAMPAGE from EXILE TRIBE" 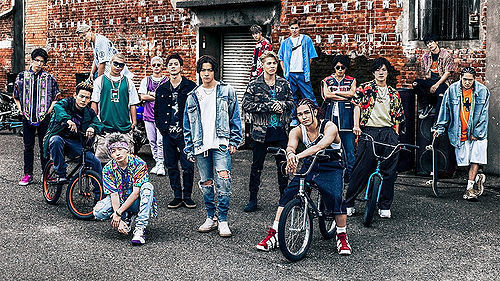 THE RAMPAGE from EXILE TRIBE or simply THE RAMPAGE is a Japanese pop male dance & vocal group that debuted in 2017 and is signed to rhythm zone and managed by LDH agency. All members of the group were chosen from the EXILE PERFORMER BATTLE AUDITION, VOCAL BATTLE AUDITION 4 and GLOBAL JAPAN CHALLENGE auditions.

On April 11, 2014, EXILE HIRO announced on the TV show Sukkiri!! a new group formed for EXILE TRIBE. To be a candidate and become a member, the EXILE PERFORMER BATTLE AUDITION, VOCAL BATTLE AUDITION 4 and GLOBAL JAPAN CHALLENGE auditions were held. A total of 16 members were chosen. On September 12, all the chosen members were decided as the final line-up. In November 16, members Zin and LIKIYA were defined as the group's leaders.

In 2014, the group also made their own version of the Musha Shugyo and participated in EXILE TRIBE's EXILE TRIBE PERFECT YEAR LIVE TOUR TOWER OF WISH 2014 ~THE REVOLUTION~ Dome tours.

In 2015, the group participated in live tours of LDH artists as supportive members.

In 2016, the group went on another Musha Shugyo challenge with the group being split into 3 teams, promoting all over Japan.

On September 27, 2016, LDH announced that THE RAMPAGE would be making their official major debut in January 25, 2017. In October 28, LDH revealed that the group's debut single is titled "Lightning". On that day it was also revealed that THE RAMPAGE is signed to rhythm zone. Prior to their debut, the group is participating in EXILE THE SECOND's tour EXILE THE SECOND LIVE TOUR 2016-2017 "WILD WILD WARRIORS" as support members.

The group announced on January 31, 2017 that the group will be releasing their second single "FRONTIERS" in April 19.