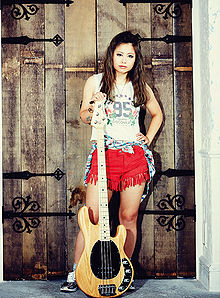 AZU (アズ) is a the bassist of the Japanese rock/heavy metal band Cyntia.

In 2006, AZU formed the band LAZYgunsBRISKY with four female classmates in high school. She began to work as a bassist under the name of "azu". With their songs having English lyrics, they made their indie debut in April 2008 and went on to play at many festivals. The group had their first successful European tour in 2010, and began distribution under the American label Good Caramel Records and the German label Spark & ​​Shine. In May 2012, the group disbanded. That same year AZU was approached by Cyntia to participate in the band after their bassist left in April. She joined the group and she began to work under the name "AZU".