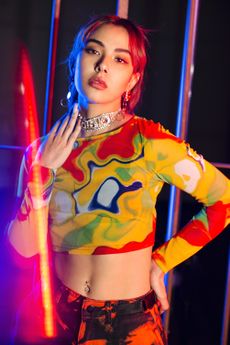 Akina is a Japanese-American singer. She is a member of the girl group FAKY.

Akina was born in California between her American father and Japanese mother and says that her role in the group is to "infuse the group with American culture." She spent her younger years in Okinawa, Japan, went back to the U.S., moved around a few places, then came to Japan again to join FAKY. "I'm used to moving around so I think that I'm great at making friends," says Akina who has quickly grown close with the other three girls. "Akina is much more mature than her age," says Anna. Mikako chimes in saying, "Akina is very perceptive and very much aware of her surroundings." Akina has been taking vocal and dance lessons since she was six years old and has recently been working on her songwriting skills with her guitar. Akina is definitely in tune with the current music scene listening to alternative R&B and electro artists such as The Weeknd and Years & Years. Fashion-wise, Vanessa Hudgens is definitely her "it" girl.