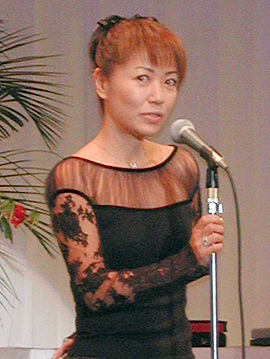 Asada Miyoko (浅田美代子) is a Japanese actress, talento, a idol singer under the label Epic Records.

Asada Miyoko was first scouted by a scout on the streets of Tokyo in the summer of 1972. At first, her parents were opposed of her entering the world of show business but let her after she was selected out of 25,000 applicants for dorama audition "Jikan Desu yo". She debutrf as an actress on the show a year later in February 1973. In agreement of entering the world of show business, Asada left school to pursue a career.

She later debuted as a singer a couple months later with the single "Akai Fuusen". The single was so successful that it sold over five million copies and become one of Oricon's Top 10 hits of that year. She would later win the Rookie of the Year award at the 15th Annual Japan Record Taishou.

In 1975, she appeared in the dorama Natsu Kashiki Umi no Uta with folk singer Yoshida Takurou, whom she later married in 1977. After marrying Yoshida, she retired from show business to become a housewife until 1983, when she divorced Yoshida. She returned to show business and become an movie and television actress. As of 2009, she is currently a regular on the variety show Sanma no SUPER Karakuri TV. 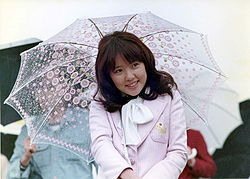