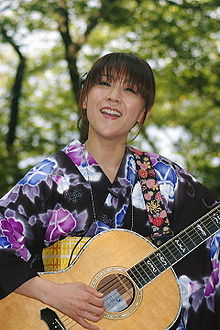 In 1993, Asami Chiyuki won the contest BS Kachimeki Kayou Senshuuken. Four years later, she joined the band Anburera as the lead vocalist but the band never released anything. She got her record label contact from Teichiku Records after she was scouted singing for a show for Inokashira Park in 2001. Having a liking for enka tunes, Asami would go sing such tunes and accompany herself with a guitar when she started to sing for street lives a year later. She finally debuted in 2003 with the single "Kamifusen" and began to be known to the media as the "Park's Songstress" due to her always performing in parks. Asami has received many awards for her music such as Japan Cable Radio Awards and honorable mention at the Nihon Record Taishou.