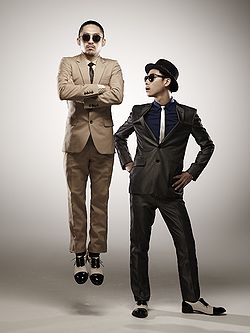 Clievy is from Oyama, Tochigi Keen from Kanoya, Kagoshima, and made their debut in 2007 on Kusuo's track KEEP MY WAY from the album Koi ga Ore Desubai. They were featured in a Kusuo song again on his hit single 1/6000000000. They started releasing their own music in 2008, their debut release being CK island, with three songs being released as digital singles leading up to the release. They released two more indie albums in the following two years, CKTV in 2009 and CK STYLE in 2010.

In 2010 they were signed to Universal Music Japan and released their debut single Tsuyuake Sengen in August of that year. Their second single Jokyo Gamushara Monogatari was released in two editions, a CLIEVY edition and a KEEN edition, each being a solo version of the song by that member. On the same day as this single was released the album It's CK which was a collection of some of their songs from their three indies albums. In September 2011 they released their debut major studio album, CK A-YANKA!!!.

They have since released three more studio albums and released two compilation albums in April 2016, CK IT'S A JAM ~BEST HIT UTA~ and It's CK ~Indies Complete~, the latter of which was not released by Universal but was an indies release.