"CHE.R.RY" is the ninth single released by YUI. It was used as the KDDI au Listen Mobile Service CM song. The single was released in both a limited CD+DVD format and a regular CD; the DVD features a different version of music video for "CHE.R.RY". "CHE.R.RY ~YUI Acoustic Version~" and "CHE.R.RY ~LISMO! Version~ (music video)" were offered as free presents to people with au cellphones on the mobile music service from 2007.02.22 until 2007.03.31. This is YUI's lead-in single to her sophomore studio album CAN'T BUY MY LOVE.

An acoustic version of "CHE.R.RY" was later placed on YUI's next single "My Generation / Understand". 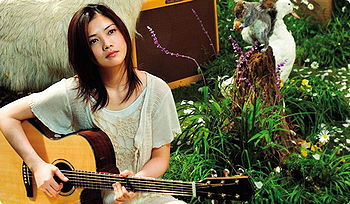 YUI Promoting the single
The single reached #2 on the weekly Oricon chart, and continued to rank for a total of 22 weeks. "CHE.R.RY" is YUI's third best selling single according to Oricon's ranking.