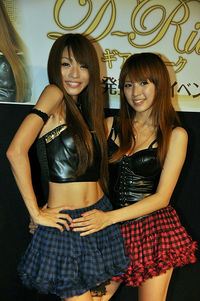 D-Rive is a Japanese pop idol duo under the agency Platinum Production and part of the umbrella group SEXY☆ALL SISTERS. The group formed in 2009 when Hayashi and Kurosawa were picked from 1,532 applicants from an audition. The duo released their first single, entitled "Speed Queen", a year later under the indies label Jolly Rodgers.