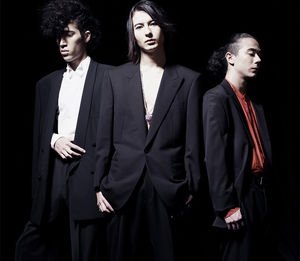 DUSTZ is a 3-member Japanese rock band based in Tokyo, Japan. The name originated from a Japanese pun, since "dust" and "pride" are homonyms in Japanese, both pronounced "hokori". It also holds reference to a quote from the Ancient Testament “from dust you are made and to dust you shall return”. All three members speak fluent French.

As childhood friends from the Lycée franco-japonais de Tokyo (The International French School of Tokyo), Ray, GUS and KenT decided to create the group in high school upon Ray’s suggestion in October 2005. They did not have an official drummer until Naoki joined in 2007. They performed at various venues in Tokyo and Osaka.

DUSTZ signed under EPIC Records in March 2009. Their first major single Break & Peace was released in May 2009, and was used as the ending theme song for the anime Sengoku BASARA. Their first major performance was at the 28th music festival in Paris, France, where they put on a free street live performance.