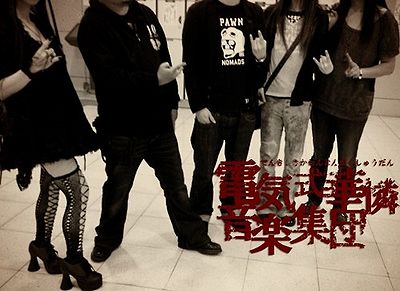 Denkishiki Karen Ongaku Shuudan means Electric-type Karen Music Group, where Karen refers to the female vocalist. Although official biographic sources keep her real name and birth year a secret, Karen is strongly believed to be another stage persona of Itsuki Yui, who is the vocalist and frontwoman of the gothic metal/electronic band Yousei Teikoku under the stage name Yousei Yui, literally Fairy Yui. Both bands are part of the Team Fairithm musical project, and Yousei Teikoku occasionally does covers of DenKare songs when performing live.

DenKare's musical style is primarily fast-paced metal with a gothic style, but their work contains undertones of electronic and classical music. Lyrical themes often include negative emotions and suffering in line with the guro-themed games they are used in. They referred to their musical style as "New Wave of Death Neko Metal" (neko means cat).