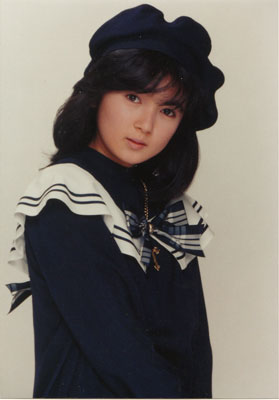 Hatada Rie (畠田理恵) is a former Japanese pop singer and actress. Hatada got her start when she was in senior high school in 1986 when she won the grand prix for the Miss Momoco contest. She later got scouted by Big Apple and moved to Tokyo where she became a regular for the TBS show Momoco Club. She also became a singer a year after in 1987 with debut of the single "Koko Dake no Hanashi ~Off the Record~" under the label Warner-Pioneer Records. Three years later, she debuted as an actress in a double role in the dorama Tokyo, Futari.

In 1996, Hatada was hospitalized after being attacked by a homeless guy at the Tokyo Station. Later that year, she retired from show business after marrying Go player Habu Yoshiharu.