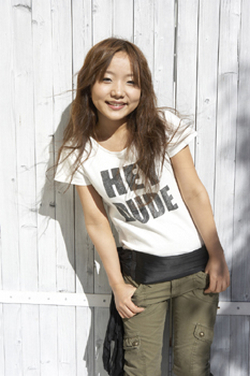 Hayashi Asuca (林明日香) is a Japanese singer who debuted simultaneously in Japan and Taiwan with the song ake-kaze when she was 13 years old. Her voice is known for being extremely strong and mature, sounding much like an Enka singer or an opera singer. Hayashi also heads a band, entitled Belovelover. Currently they have not released anything, but have played together live.

Born and raised in Osaka, Hayashi always thought that she would become a singer. She grew up listening to Disney music and imitating foreign Divas as she listened to their music. Hayashi managed to debut at such an early age by her piano teacher listening to her singing accompinament of the songs she was learning, and sent a demo tape into Toshiba EMI. She won a contract, and debuted simultaneously in Japan and Taiwan with the song ake-kaze in 2003. She was only 13 at the time. This song reached to number 14 on Oricon Charts; which was an impressive feat for a debut artist.

Her debut album, Saku (咲; or Xiao in Mandarin) was released in Japan, Taiwan, Hong Kong and China in May of 2003. This was the first time a Japanese artist had debuted at the same time in both Japan and China. Saku also broke another record, for it's release made her the youngest artist to ever have a top ten weekly debut in Japan on Oricon charts. Later on in that year, her single Chiisaki Mono was selected as the ending theme for Pokémon Jirachi Wishmaker. Later on for the English version of the movie, Hayashi sung this in duet with Cindy Mizelle. Hayashi's parts were sung in Japanese, and this had never happened before in Pokémon movies. However, The song was renamed "Make a Wish" for the English version.

Hayashi has done a duet with Chinese arist Chen Min on Erhu entitled Tsubame ni Naritai. There was also a version of this song sung in Mandarin, instead titled Wo Yuan Zuo Yi Zhi Xiao Yan Asuca also sung her song Renka in Mandarin (The title changing to Lian Hua).

Hayashi won the award for New Artist of the Year Award at the 18th Japan Gold Disc Award. Currently Hayashi's sales seem to be waining after the extreme sucess of ake-kaze and Chiisaki Mono. However, it is most certain that she will keep releasing new material and her popularity will stay.

As Hayashi matures in the music business, she is taking more control over her own career. The number of songs she has written herself is growing. Currently she has written the lyrics to the songs Jibun Shinjite, Mou Ichido Anata ni Aitai, Snowdrop and Taisetsu ni Shiyou ne, and even composed Snowdrop and Taisetsu ni Shiyou ne. Hayashi has even started her own rock band, called Belovelover (currently they have only performed live though). Her most recent album, Chou, was even produced by herself (her being 16 at the time).

In 2006 Hayashi went on hiatus after being dropped from Toshiba EMI; however, she was signed to the music company BBMC in the same year. From October 2006 onwards, Hayashi's new song Kokoro no Mama ni was used as an insert for the daily morning 15 minute drama Imotako Nankin. Later on in the drama, Hayashi herself made cameo appearances for three episodes in which she played the role of an anti-war singer. Hayashi sang Taisetsu na Mono (the B-side to her Kokoro no Mama ni single) onstage during the drama. The single was released in late March 2007, near the end of the drama's screening time.

In the distant future, Asuca wants to sing internationally and to study gospel music in New York.