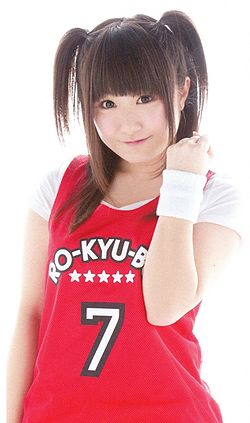 Hidaka Rina(日高里菜) is a Japanese seiyuu, actress, and a former U-15 idol. She is affiliated with Office Osawa management agency, and was previously represented by AT Production. She's also the only member of RO-KYU-BU! who has yet to make a solo music debut.

Hidaka used to work as a child actor appearing in many variety shows and in TV dramas. As a U-15 Junior idol, she released one photobook and two DVDs. She used to be a member of the 4th recording of TOBANS ( a unit for the Kids variety show Yo! KIDS! Alongside other 3 girls). In 2008 she debuted as a voice actress. In 2011 she became a member of the unit RO-KYU-BU!. She’s the number 7 and her image color is Orange. Since 1 of February of 2013 she moved from her current office to go study at a University.