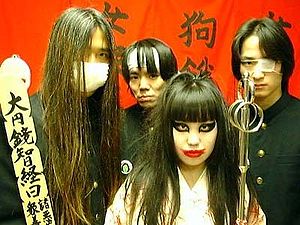 Inugami Circus-dan (犬神サーカス團) is a Japanese rock band formed in 1994 through an advertisement in Garo, a manga magazine, placed by Inugami Kyouko. Lead by drummer Inugami Akira, who does most of the song and lyric writing, they perform a fusion of tradition Japanese music (enka) and hard rock. In 2003 they debuted under the major label zetima, with the single Inochi Mijika shi Koiseyo Jinrui!. In 2006, according to the Japanese wikipedia page, due to not being allowed to produce gloomy songs under zetima, they returned to the indies scene under the independent label "Office Kinmedai."

Since Japan is an island country, we cannot liberate ourselves from "inescapable human relations," the prime nature of a village society. Within those oppressive human relations, emphasizing one's true motives can be called an act equivalent to suicide.

Formerly, the Japanese have trusted in expressing their muddled "it can't be helped" thoughts and malicious sentiments through folk songs and children's songs. Even things that usually could never be said were able to be represented through a special form of expression known as "songs." Perhaps through singing these "songs," malice can be transformed into amusement and possibly even become purified, preserving the serenity of the soul.

It is there that we find the unique beings in Japan known as the Doggod Circus Troupe. According to the leader, Inugami Akira, their motto for all activity in the music scene is to shake up the Americanization of modern rock and pop, re-examine "what songs truly ought to be to Japanese people" and restore the spirit that should, by nature, dwell in the heart of every "song."

Indeed, their performances certainly release the malicious sentiments the Japanese have sealed into "songs," as if the shaman Inugami Kyouko had splashed the very blood herself. Her voice, which can reach even the subconscious levels, at the same time gently soothes the heart of those who listen, and possesses a supernatural ability that can awaken the brutality that sleeps in every person's genes.

Her voice will expose the joy, anger, pathos, and humor of any listener.

Every time I hear that voice, I cannot but recall Queen Himiko, who ruled Yamataikoku, in third century AD. It is my assertion that Inugami Kyouko is the owner of a voice which, just like Himiko, can provoke tens of thousands -- nay, millions of groups of people.

Nowadays, with modern technology improving, communication between mankind is in the process of becoming sparser and sparser. I believe the coming of the Doggod Circus Troupe's music, as if cursing this era, is actually a message to show humans how to live as true humans in this new century.

The Inugami family are sorcerers hailing from Shikoku's Kochi Prefecture. The sorcery that has been passed down for generations in the Inugami family is defined as first, the act of burying a dog alive, placing food in front of it and leaving it there for three days and three nights, then after choosing at one's discretion the very moment when the dog finally turns mad, beheading it, then with the malice that dwelt in that dog's head, cursing and killing one's enemy. The seventh head of the Inugami family, Inugami Hiroshi, in Meiji 5 (1872) married Matsu, a descendant of the Snake God, who gave birth to three children: Jin, Jouji #2, and Kyouko. Just before that, however, it is said that one of Hiroshi's maids, Yone, gave birth to a horned child named Akira.

Before long, the four children, as the snake-girl (Kyouko), the Chinese magician (Jouji #2), the scholarly dog tamer (Jin), and the fire-breathing man (Akira) mastered their arts and toured the entire country as a circus troupe.

But these children were criticized as being "possessed by the Doggod," and in the end, were buried alive deep within the earth in the year of 1894.

100 years later, in 1994, thanks to the resurrection abilities of the alchemist Nishida Rou, the quartet returned to life, and started their band activity. The form of expression known as rock is naturally music that aims to acquire freedom of the soul through transforming malice into amusement. Therefore it was the most suitable way for the four to discharge their curse of having been persecuted and killed unto the world.

Using the "darkness of the heart" from which no one can avert their eyes, the music of the Inugami family became a nation-wide hit in the hearts of sickened boys and girls. At once, they had achieved entrance to the palace of the few Angura bands that exist.

In 2003, the "Will of Inugami Hiroshi," which held the key to the Inugami family's inheritance, was discovered. Below are its contents:

"I have decided to pass on all my fortune as well as my supernatural powers to Kyouko. As she is the reincarnation of the great ancestor of the entire human race, "I-sama," she is the first in a new breed of humans that possess cells of perpetual youth and longevity. Together with the power of her brothers, Kyouko should propagate her words along with the seven Buddhist precepts, around the entire world. If you follow my instructions, the world will soon become yours."

...however, after three years it was established, thanks to expert opinions, that this will was in fact a forgery. Obviously this is because no matter how long they waited, they were never able to take over the world. No, forget the world, they didn't even accomplish enough to make a steady living.

While nearing the end of their rope, on a provincial-wide tour, a divine message came to the Doggod Circus Troupe, and all the members saw the exact same dream at the exact same time.

In the dream, an old man with golden eyes said:

"Search for the shining, crimson fish that lives on the bottom of the ocean. If you do that then finally, the world will become yours."

The next day, a meeting was held backstage.

It was in July of 2006 when a single fish floated through the minds of the four.

And that fish is!?