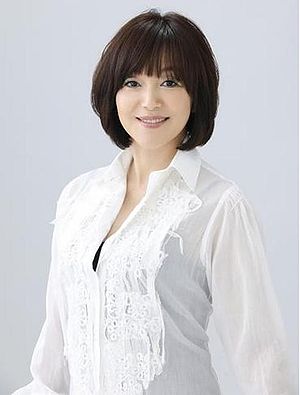 Iwasaki Hiromi (岩崎宏美) is a Japanese pop singer and actress.

Iwasaki was born in 1958 as the oldest out of three daughters. While in grade school, Iwasaki Hiromi started taking voice lessons. She later entered the singing contest "Star Tanjou!" in 1974 as a third year middle school student. Singing Kosaka Akiko's "Anata", Iwasaki gained top prize in the contest and a contract with Victor Records. A year later after the contest, Iwasaki debuted as a singer with the single "Duet". She promoted the single with the catchphrase "Iwasaki Hiromi Echoes From Heaven" (天まで響け岩崎宏美).

Iwasaki's big hit didn't come until her second single, "Romance", was released. Selling over 90,000 copies, the single gave the chance for Iwasaki to make her first appearance on that year's Kouhaku Utagassen. Two years, she gained another hit when she released the single "Shishuuki", winning many awards at the end of the year musical award show Japan Record Awards. Before the decade ended, Iwasaki began a second career as an actress by appearing in the musical "Hamlet".

In 1982, Iwasaki released the single "Madonna-tachi no Lullaby". Used as a theme song to Tuesdays Suspense Dorama series, the single was well-received by the public as it sold over 800,000 copies and won Iwasaki another award for Best Song Ballad. Not long after, her sister Iwasaki Yoshimi made her debut as a singer with the debut of her first single "Aka to Kuro".

From 1988 to 1998, Iwasaki performed at various live houses around Japan. She also collaborated with Cat Gray, Sato Chikuzen, and Shionoya Satoru on various songs including the singles "Yurusanai" and "Ato Kata mo Naku". In 2007, Iwasaki collaborated with the Czech Philharmonic to release the album PRAHA.