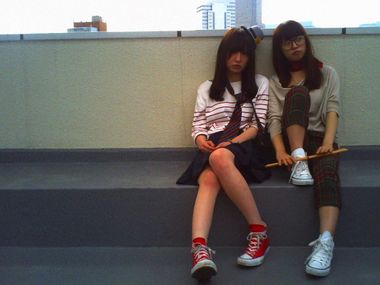 KOR=GIRL (コル・ガール, stylised as KØR=GIRL®) is a Japanese pop duo signed with D-topia Entertainment, and like all acts signed to the label they are produced by musician Terukado. Their music is pop-rock with electronica influences, defined by their use of KORG WAVEDRUM percussion synthesizers.

In July of 2010, Terukado posted a message titled on KOR=GIRL's website regarding the release of the duo's debut mini-album KOR=GIRL I. The translated version on the site reads:

A lot of songs I produce have been spread for free on some download sites illegally for several years.
I don't know why, but the songs have not been released yet are leaked out on the sites.
It is said that the situation is popular.
My partners and staffs urge people to delete the songs on the Internet as hard as they could to protect the songs.
Some agree with that, Others disagree though.
Actually, music will be for free someday.
I can say that You Tube is like my hard disk when I use iPhone.
Music will be for free someday.
I'm going to distribute songs to fans on the Internet, although the partners and staffs oppose doing it and it may cause some problems.
I'm very glad to have you listen to the songs.
A musician, I, and an artists never die.

Near the bottom of the site are free download links to the songs on the mini-album, but all fade out around three minutes thirty seconds.