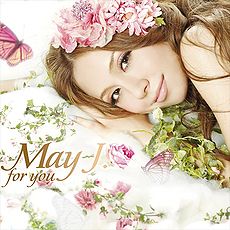 There are two versions of "Kaze ni Naritai" to be found in May J.'s discography. These versions, listed chronologically, are: