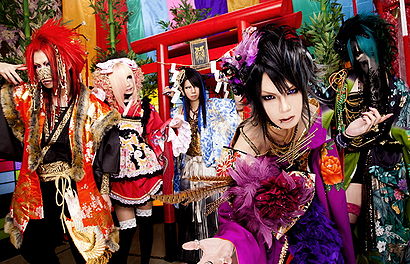 Kiryu (己龍) is a five-piece Japanese rock band in the visual-kei scene from Tokyo with the independent label B.P RECORDS. They formed sometime in September of 2007, though it wasn't until December that they had any official activities. Kiryu came together under the band concept of Tsuuzetsu Nostalgic, which they take to mean traditional Japanese aesthetics in modern contexts, and in turn it describes their visuals and music.

They have an alter-ego band, called MY DRAGON, that has a more overall pop sound and no traditional Japanese aesthetics. The group started in 2009 and the members are all known under different names. They released their debut single "Nijigen Complex" on February 2nd, 2011.