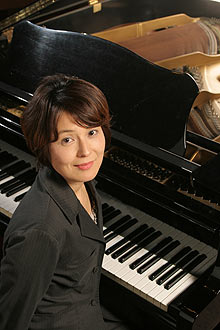 Kume Sayuri (久米小百合) is a Japanese pop singer-songwriter. She made her debut in 1979 under her maiden name, Kubota Saki (久保田早紀) with the hit single, "Ihoujin". She is a Baptist Christian, and since the mid-1980's has been performing Christian music.

Kubota has always been interested in music and she started playing the paino at the age of four.

When Kubota was in junior college, she sent in a audition tape to Sony Music Entertainment. She was soon told that she passed the audition and was offered a record deal. She made her debut in 1979, with the single "Ihoujin". The song was used as the Sanyo Electric CM song. Even though the single didn't start out high on the Oricon by it's second week of December 13th the single broke into the top ten, reaching #5. On it's third week, December 27th, the single climbed to the top reaching #1.

After her break through hit, Kubota continued to release a few successful singles and albums, but all failed to surpass the success of "Ihoujin". As the years went on her sales continued to drop.

In 1984, Kubota married music producer Kume Daisaku, and stopped releasing music under her former name, Kubota Saki. She changed to name to Kume Sayuri, and released one more single before retiring in 1984. Since then she started singing Christian church music, praising the lord through song.

Since leaving the music scene she has made a few minor returns. She came back in 1987 and 1996 releasing albums under her married name. Most recently in 2007, she performed the Power for Living CM.

Note: All releases are credited to Kubota Saki, unless noted.