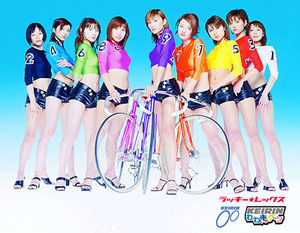 LUCKY LEGS (ラッキーレッグス) is a Japanese pop talento idol group. The concept of the group was to have members who were over 165cm (5'5") tall and have long legs. The group made their debut in 2001 with the single "KICK & KISS" with seven members. They released one more single and appeared on the annual Kouhaku Uta Gassen at the end of the year before going on hiatus.