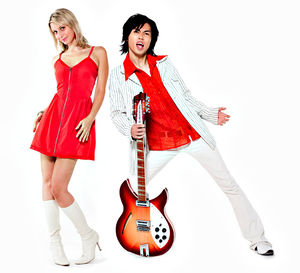 Layla Lane is an American pop/rock duo from Los Angeles, California. In 2010, they debuted in Japan under avex trax with the song "Happy Lane", which was used in a series of Coca-Cola commercials.

Layla Lane was formed after Heday, a Yaizu native and UCLA graduate in classical music and guitar, and Valerie, a USC graduate in classical piano, met at a mutual friend's party. Since both were classically-trained musicians and fans of The Beatles, the two hit it off and started recording and performing in the Los Angeles area. Their song "No More" was featured in the Hollywood film Killers, and its PV, directed by Ochiai Ken, has won several awards.

Before long, Layla Lane received an offer from Coca-Cola to sing a CM song. Their Japanese debut, "Happy Lane", started airing in March 2010 and garnered much curiosity, resulting in over 1,000 inquiries to Coca-Cola about the identities of the singers. The song was released as a single in October under avex trax, followed by a mini-album, also called Happy Lane, in November.