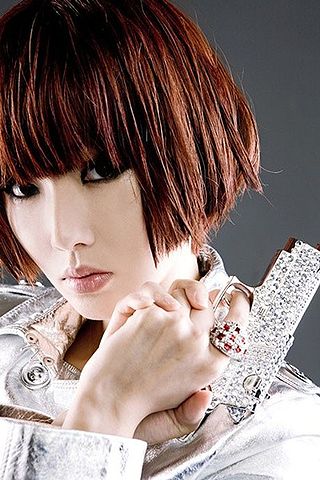 Lee Jung Hyun is a famous Korean pop/trance artist well known for her catchy song tunes. Her songs have been added to the Korean versions of Dance Dance Revolution, and her songs are frequently covered.

Lee Jung Hyun made her movie debut at the age of 16 in Ggotip (꽃잎, "Petal"). Her style of music tends to be primarily dance with a heavy techno influence. For her 5th album titled, Passion, she incorporated a Latin style of music, complete with Spanish Guitar and flamenco-style tap dance. Her first single, Wa (와, "Come") topped the Korean charts for three weeks, while her third, Ba Kkwo (바꿔, "Change") won awards for Best Song and Most Broadcasted Song. Many of her songs are sung in an angry mood, from the point of view of a rejected lover.

Wa and Ba Kkwo were also included in the Korean release of the game Dance Dance Revolution. Fan-made DDR dance steps of her other works are popular with players of DDR simulators.

Chinese singer Sammi Cheng has sung remakes of many Lee Jung Hyun hits such as Ba Kkwo (became "Mei Fei Se Wu") and Nuh (너, "You"), which became "Tian Yi Wu Feng", all of which have lyrics that don't relate to the original song.

An interesting fact about Lee Jung Hyun is that when she performs on stage she attatches a wireless microphone to her finger, so that her dancing will not interfere with the sound. The action she uses when singing into her microphone has became a trademark of her style.

In late 2004, Lee Jung Hyun debuted in Japan with the single Heaven. She sang a different version of the title song at the 2004 Kouhaku Uta Gassen, called "Heaven2004".

Her sixth album, Fantastic Girl, which was originally scheduled to be released in July of 2006, was released on October 11th.