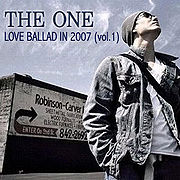 "LOVE BALLAD IN 2007 (vol.1)" is the first digital single released by The One. The song was used as the theme song for the drama Lonely Bird, and was later released on its OST.