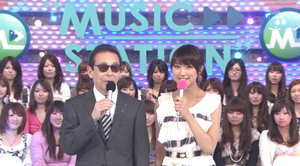 MUSIC STATION is a popular weekly music variety show that has been on the air since 1993. It airs Fridays at 8pm on TV Asahi and usually has 5-8 J-Pop artists and groups as guests on each show. The two hosts (タモリ Tamori and Takeuchi Yoshie) chat with each artist for a couple minutes before they hit the stage and perform their latest song.