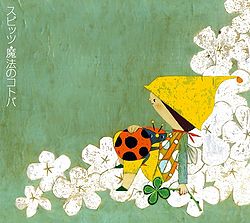 "Mahou no Kotoba" is the 31st single released by Spitz. First press comes housed in a digipack. The title track was used as theme song for the movie Honey And Clover. The single reached #5 on Oricon charts, and charted for 15 weeks. As it sold 114,408 copies in 2006 it became the #89 single of the year.