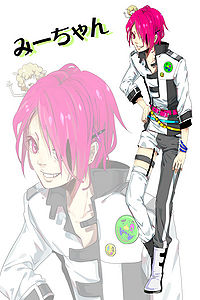 Michan (みーちゃん) is a Japanese pop singer and a member of the group PointFive(.5) who gained attention through Nico Nico Douga video sharing network. In November 2010, he made his solo debut with the album 7. Like other Nico Nico Douga artists, not much of his personal information is revealed.