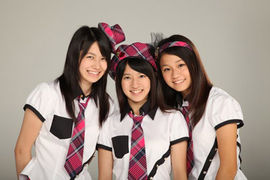 Mini Skirt (ミニスカート) is a sub unit of AKB48 created in 2010. It consists of three members of Team Kenkyuusei, since the unit has formed all three members have been promoted to Team 4.

Mini Skirt was created to promote the game machine Pretty Rythm Collection 2 in the Kansai and Kanto regions. They appear in a commercial for the game and sing a song called "Mini Skirt no Yosei" (ミニスカートの妖精; Mini Skirt Fairy).